Hundreds of children have either been killed or used as child soldiers in fighting between Yemeni government forces and Houthi-led Shia rebels in the north of the country since August 2009, according to a new report by Seyaj Organization for Child Protection (SEYAJ), a local child rights NGO.

The 22 February report said some 89,000 children were forced to flee their homes with their families, whilst “187 children were killed, 402 exploited as soldiers by Houthis, and another 282 recruited by pro-government local militias.”

The findings are based on an SEYAJ survey in December 2009 – with support from the UN Children’s Fund (UNICEF) – of children in internally displaced persons (IDP) camps in Hajja, Saada and Amran governorates, as well as in some of Saada’s conflict-ridden districts: Saada city, Razeh, Alb, Baqem, Ghamr and Qataber.

According to the report, 42 percent of children in camps (estimated at 35,000) are affected by malnutrition, 19 percent have diarrhoea, 25 percent have respiratory infections, and 3 percent malaria.

SEYAJ conducted interviews with 684 former child soldiers and collected information on a total of 73,926 children for the survey.

Aid agencies say more than 70 percent of the estimated 250,000 people displaced by the conflict since 2004 live outside IDP camps, with children making up over half of the displaced population.

On 11 February the two sides agreed on a ceasefire, which is fragile, with reports of sporadic clashes.

The SEYAJ report said 383,332 children in Saada (about 97 percent of the governorate’s school-age children) had been unable to go to school in this period.

Displacement, insecurity, and the destruction of schools, or their utilization for military operations, were the main reasons, Ahmad al-Qurashi, head of SEYAJ, told IRIN. 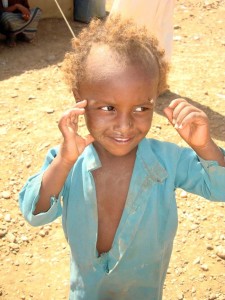 Of the 701 schools in Saada Governorate, 17 were destroyed in the fighting and another16 had been taken over by one or other of the warring parties. Most of the remaining schools were deserted, he said.

“I’d rather die than go back to him”

“The number of children exploited as soldiers could be much higher than the figure indicated by the report because we had difficulty detecting who is still under 18 due to lack of birth documents,” SEYAJ lead researcher Fahd al-Sabri told IRIN. He said only 8 percent Yemeni citizens have birth certificates.

“The number of children killed during the fighting could also be much higher than the figure in the report because many areas hit by fighter jets of the Saudi and Yemeni armies remained inaccessible,” al-Sabri said.

Since August 2009, aid agencies have had difficulty getting comprehensive information about the war’s impact on children, according to UNICEF child protection specialist George Abu al-Zulof, but, he told IRIN, most of the laws regarding child rights appeared not to have been respected during the fighting.

We urge parties to the conflict to release child soldiers so they can get back to school, Abu al-Zulof said, and he called for “an impartial investigation” into the impact of the war on children.

SEYAJ chairperson al-Qurashi urged Yemen to update Child Rights Law No. 45 of 2002 to make provision for clear penalties against individuals who exploit children in armed conflict.

Did you find apk for android? You can find new Free Android Games and apps.
2010-02-23Newsauto, by, children, conflict, draft, hardest, hit, northernalqorashi